Sad as I am to leave beautiful Delphi (though it’s under deep snow at the moment I am told) I have, at least temporarily, waved goodbye to Oracle, which is now in the hands of the publishers and their book and cover designers. The manuscript has been proofed, the front cover tag-line and back cover blurb have been agreed and the internal design created, again by Petya Tsankova, so it’s consistent with that of Plague, which Petya also designed.

Like the earlier book, Oracle takes place over a few days, so that is how the book is divided up. My sketch of the Treasury of the Athenians at Delphi ( 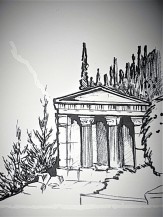 see below ) is featured on the named ‘day’ pages as the sketch of the Palace of Westminster was in Plague.  It looks good.  This time, however, the book has a ‘Praise for’ section at the front, ( squirm – it’s what is done ). At the moment this contains endorsements and complimentary review remarks about Plague.  As we approach publication day these will be augmented by what I hope will be complimentary reviews and endorsements of Oracle.  I also get an ‘About the Author’ at the back, so Claret Press must be pleased with me.

Already the promotional schedule of events is being formulated ( there are two events in place already, with the UK Crime Book Club and Kensington & Chelsea and Westminster Libraries, see the Events page ).  The manuscript will go up on

NetGalley during March, for a limited period only, to attract reviews and test reader reaction.  Any revisions will follow and Advanced Review Copies will be produced and despatched to various ‘experts’ and to reviewers for newspapers, magazines and blogs. Quite a lot of the publications which reviewed Plague are anxious to follow up with a review of Oracle and, I’m pleased to say, there are plenty of readers out there who tell me that they re anxious to read it too. Publication day will be 5th May.

I’m very pleased to have the help of a number of ‘experts’ with Oracle, as I had on Plague.  These include Maro Nicolopolou, Head of Conferences and Artistic Programmes at the European Cultural Centre at Delphi, below (and a lover of detective fiction) and Sharon Hartles, zemiologist, of Strathclyde University and the Open University.  Maro has already been of inestimable help in directing me to all the 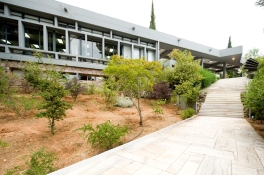 changes at the Centre since I visited it back at the turn of the millenium and to the changes in the town.  This is so important given that the trip to Delphi I had planned for last year had to be abandoned because of COVID.  I’ll be writing about the amazing Centre and its conferences and performances later. Sharon has introduced me to the new discipline of zemiology and Oracle is probably the first time it has featured in a novel (see earlier post here).  She’ll be sure to put me right if I have erred. 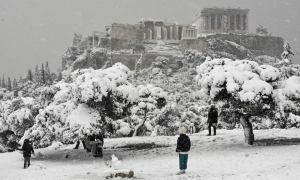 So, a break from the actual writing then, until I begin on Opera, but not a break from work, with lots of activity around getting Oracle absolutely ready for publication and for its promotion and still doing lots of events for Plague.  I’ll be writing more about Oracle in the coming weeks, but here’s a photo of what Athens looked like earlier this week.