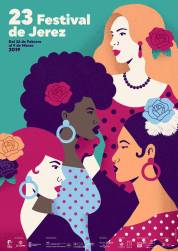 For us another fabulous Festival de Jerez is over. We have all gone our separate ways, though performances at the 2019 Festival continue until next weekend.  Yet again we have been astounded and amazed by the quality, as well as the variety, on offer.

Festival de Jerez 2019 was also the Festival Feminista, a full-throated riposte to recent regional elections in which, for the first time since Franco, representatives of the far right, via the new party called Vox, won seats in the Andalucian Parliament. Vox stands on a specific anti-feminist platform, as well as being anti-immigration and advocating what sounds like a return to the 1950s. So there was a full supporting programme of events for feminists of both genders. The Festival also had plenty of female headliners – Ana Morales, Eva Yerbabeuna, Maria Pages and, on Saturday, Mercedes Ruiz.

We saw Ruiz at the Teatro Villamarta, where she was joined by some famous fellow performers, including some old favourites. The performance, entitled Tauromagia featured original music and composition from flamenco great Manolo

Sanlucar, re-interpreted by Santiago Lara as music director ( see The Guitar in Time and Jazz Guitar ) and singer and setter of text, David Lagos. This reunited three of the four protagonists of Lamento a phenomenal performance which we saw at the 2016 Festival. Ruiz was in fine form throughout, dancing with second soloist, Ana Agraz and a fine cuerpo de baile, Beatriz Santiago, Aurora Carabello and Vanesa Reyes.  We, like the rest of a very full theatre, were enthralled and entranced.  The ovation at the end of the performance lasted a long time, and justifiably so.

It was probably just co-incidence, but we saw more dancing this time than usual. Not just the established stars but some newer, up and comers. So, at Sala Paul, Bodegon, an intriguing set by Jose Maldonado, Javier Latorre and Carmen Coy. This had first been performed at a Festival in France in 2016 but had been developing since. We had seen Maldonado as a member of Miguel Linan’s company in 2016 ( see Reversible ), representing the masculine. Here he had a more fluid style although still exhibiting classical training and remarkable athleticism in a set originally directed by Linan. A modern dance piece with flamenco at its heart it was about creativity and art and involved the principal painting pictures with both paint and light, a

remarkable Coy acting as muse, creative idea and, possibly creation.  I do not pretend to have understood it all, but I enjoyed it a lot and look forward to see what this talented dancer does next.

The other dancer new to us was Adrian Santana, who we saw deliver Simbiosis, a more traditional set in Sala Compania on Monday night. Traditional, but still with new ideas.  Two male singers sang separately and together of love and loss as Santana and Agueda Saavedra formed a wonderful partnership, dancing solo and together. Stunning.  Afterwards we kept bumping into the performers, now in civvies, but still on a high from the tremendous reception given to their 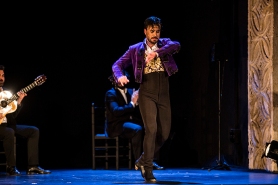 performance and out on the town.  A terrific end to our sojourn at the 2019 Festival.

And guess what, it didn’t rain. Not a drop.  Unlike last year ( see 2018 Round Up ).  Now London awaits the arrival of a clutch of starry flamenco talent at Sadlers Wells Flamenco Festival 2019. This has finally moved from February/March when it repeatedly clashed with the Festival de Jerez to July.  Hooray – two flamenco festivals a year!

Some of these photographs are by Javier Fergo for the Festival de Jerez, others by Helen Hughes.

Just look at these buds, almost bursting and, despite the cold this morning, it's possible to see that spring is on its way.
Vauxhall Cross HQ of MI5 aka the Security Services, in the sun today.
I'm appearing as a guest on The Controlling Idea next week, talking about the Civil Service and the Deep State. It's free to attend, why not join in?
Wet and windy night at Canary Wharf after a good meal with friends.
Wonderful sun on the Common this morning.
Loading Comments...
%d bloggers like this: