On Friday to leafy Ealing to see the newly opened, refurbished Pitzhanger Manor. 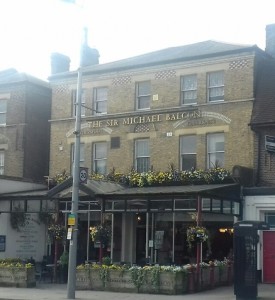 country house and showcase for architect and collector Sir John Soane, with its attached art gallery. In the sunshine Ealing looked leafy indeed, with its Common and Green ( who knew, not me, certainly ). Still there, set back from the Uxbridge Road, the original Ealing Studios where so many classic films were made. We even found a handsome Georgian/early Victorian hostelry named The Sir Micheal Balcon, after the legendary producer and head of the studios in its heyday. 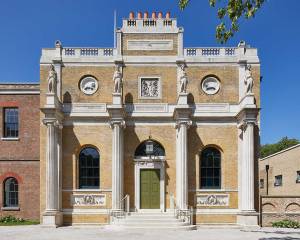 frontage and garden now behind a formal war memorial.  Entrance gates are to the right hand side of the formal gardens. Inside it is less chaotic – less mad – than his house and museum on Lincoln’s Inn Fields, but it still demonstrates his distinct architectural style and idiosyncratic and impressive design. The interior has been meticulously restored to a very high standard, including the hand-painted and beautiful ‘chinese’ wallpaper in the gloriously light drawing room, the exquisite ceilings and ‘marbled’ walls.

The oldest part of the building is the south wing, which was build by Soane’s first 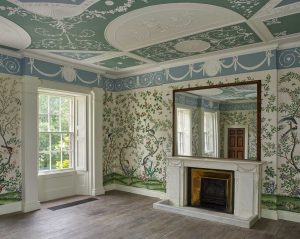 employer George Dance and which Soane retained, demolishing the rest of the mansion and rebuilding it, including a colonnade of ‘ruins’, which now links the main house and the modern gallery.

Inside there is his trademark use of space and light, the arched ceilings, friezes and roundels, niches and other stone decoration, like the caryatids in the ground floor room, front right. It isn’t a large house and Soane uses a designer’s tricks to fool the eye, drawing the gaze through open, often mirrored doors, from room to room to give the impression of greater space. The entrance hall goes straight through the house to the long gallery at the rear and doors open off it, as well as rooms having linking doors between them.  The main staircase, of iron and stone, is off to the left beneath a large and elaborate skylight.  Jet, marble in various colours and, very clever, wallpaper of fake marble make the interior very dramatic. 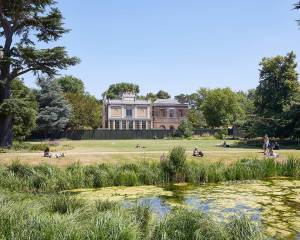 I loved the long glass gallery which runs across the rear of the house and overlooks what would have been the private gardens, including a lake with rusticated bridge.  These have now been merged with Walpole Park (1901) a public park which includes another lake, formal gardens and a sporting pavilion. I also loved the two huge rooms in George Dance’s wing, the dining room on the ground floor and salon or drawing room on the first. I’m not surprised that Soane couldn’t bring himself to demolish this even if it means that the whole Manor has a rather lop-sided look. 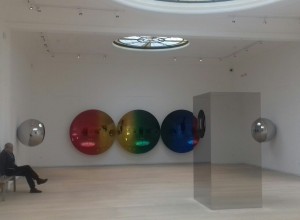 the old kitchen buildings into Pitzhanger Gallery. The current exhibition is by Anish Kapoor and it complements Soane perfectly. Kapoor’s mirrored and sculpted discs and boxes play with light, vision and sound just as Soane’s interiors do, tricking the eye.  The pieces are interactive and huge fun. A gallery employee told us that he saw something new in each of the pieces every day he turned up for work and took great pleasure in watching visitors play with the distortions. We certainly enjoyed doing so, taking photographs into the sculpted mirrors which captured one of us upside down in the middle ground while the other was the right way up nearer to the piece.

Entry to both house and Gallery is £7.70 (£4.95 concessions).  I recommend it highly, especially while the Kapoor is on, until 18th August.  Ealing Broadway is the nearest tube and rail station, turn left out of the station and follow the signs for Ealing Green (not Ealing Common as we did).  There are signs painted on to the pavement. There are plenty of places to eat and drink on the High Street.

There are many ways to die. Plague is just one.