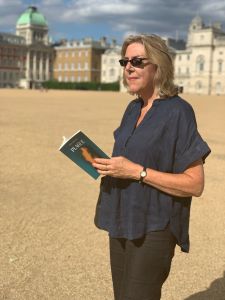 There are so many ways in which place is important to writers – we explored the subject in the first Clapham Book Festival back in 2016 ( see Place and the Writer ).  One of the most common comments about Plague is that it is very much a London book, including as it does much about the city’s landscape, history and the forgotten subterranean world beneath it. The book certainly reminds those who have lived in or regularly visited London of a city they once knew ( I’ve received comments to this effect from other parts of the UK, from the US, from Australia  and Malaysia, from Austria and from South Africa ). So it must be evocative.

Elephant & Castle tower block. The Victorian streets of Clapham are home to my protagonist, while homeless character, Spikey Fullman haunts Shepherd’s Market, but bemoans the recent changes there as not conducive to a good night’s sleep. The venerable Palace of Westminster is a focal point, as are the streets close by – the Georgian terraces as well as the concrete civil service buildings. There are vistas from and of towers and high rises as well as the scenes beneath the earth and the main players walk all the major Westminster thoroughfares between Whitehall, the Embankment and St James, Bond Street and Pimlico.

One point to make about Plague is how far it has travelled, only six weeks into its published life. I have received snapshots of it on the Isle of Skye, in deepest Dorset, in the flatlands of East Anglia and in various parts of the north of England. I have yet to see it in Wales, Scotland or Northern Ireland (though I know it has been read there, because I have seen reviews on Goodreads and Amazon from readers who live there). Plague has also travelled internationally, from the lawn of a Normandy chateau (left) to a Californian balcony over-looking San Francisco Bay (above), from an American Naval Base to a tapas bar in Jerez  (admittedly, that one, below, was with me).

Nonetheless, I was surprised to learn that my publishers, Claret Press, has

entered the novel for the Ondaatje Prize. This award from the Royal Society of Literature is for a work of fiction, non-fiction or poetry, evoking the spirit of a place. The 2019 winner, Aida Edemariam, who wrote The Wife’s Tale, appeared at the Clapham Book Festival that year in conversation with Michele Roberts.  My book is commercial fiction and, while there’s nothing wrong with that, it is, after all, what Dickens would have claimed to write, I wonder if it’s really the sort of book the prize judges will be looking for. More promising, maybe, are entries in the Crime Writers Association Daggers, including the John Creasy (New Blood) Dagger and the Ian Fleming Steel Dagger. Watch this space, as they say in cliche-land.

I, meanwhile, am busy writing the sequel (earlier this week while awaiting a late flight at Sevilla airport, see left, which prompted the thoughts for this article ). Oracle takes place in a very different location to London, at an isolated cultural centre half-way up Mount Parnassus in Greece, close to the ancient site of the Temple of Apollo at Delphi. It is a place both very dramatic and beautiful and is timeless. Its location is central to the novel, not just to the plot, but that’s because place is very important to me as a writer.