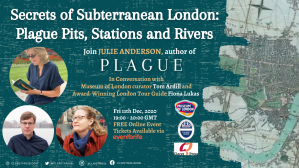 Claret Press is organising an online event which may be of interest to readers of this website. On 11th December, from 7 – 8 in the evening, I will be speaking with Tom Ardill, Curator at the Museum of London and Fiona Lukas, award-winning Blue Badge guide and expert on the London Underground.

Tom curated, with Kate Sumnall, the fascinating 2019 exhibition on London’s ‘Secret Rivers’ at the Museum of London in Docklands, which I blogged about at 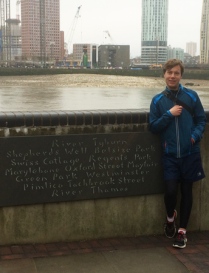 the time. Did you know, for example, that there is a Tyburn Angling Society, set up to try and ‘restore’ the river so as to fish in it ( an almost impossible task since it has been subsumed into Bazalgette’s wonderful London sewer system, but a charming, if quixotic, idea  )?  He is also a fellow river traveller, having followed the course of the Tyburn, as I did, but taking the southernmost arm, down to Pimlico and he ran it, rather than walked. You can read about his run here. Tom is curator for Paintings, Drawings and other artworks held by the Museum too. Of course, as readers of Plague will know, a Museum of London archaeologist appears at the beginning of the book. He bears no relation to Tom. 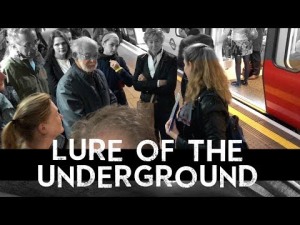 The other contributor is Fiona Lukas, an award-winning Blue Badge Guide, (  she was Guide of the Year for the City of Westminster and City of London ) whose speciality is London Underground. She regularly hosts the popular tour The Lure of the Underground ( listen to her podcast about it here ) and is coming with interesting facts aplenty, including about the ghost lines and stations no longer in use. I had used to walk passed the old Aldwych station everyday on my way to work and have come across others, like that at Marble Arch.  There are many other little known LU-owned places, like the Bakerloo Line depot at London Road, south of the river, which features in Plague. 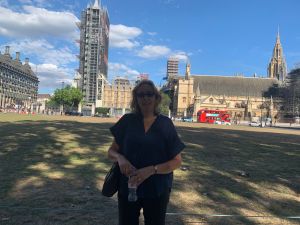 the novel, although I expect Tom to have far more knowledge than I about the Tyburn itself. I’ll be touching on Plague Pits, Roman Remains – like the baths at North Audley Street, completely unmarked on the surface, the Great Conduit which runs along Oxford Street and, of course, the Palace of Westminster, with all its idiosyncrasies.

I can’t wait to ask Tom about some of the historical sites and Fiona knows all about the engineering, which is of particular interest to me. We will, doubtless, touch on the brilliant Bazalgette and his sewers. By the way, those who have read Plague will understand the reference to sewers and the ‘sewer walk’ undertaken by some of the main characters, but they may not know that the book contains a small homage to another book in which sewer scenes appear, which was made into an even more famous, not to say iconic, feature film. To find out what this homage is, or make your guess at it, come along and join us on 11th December.

For more on Plague and the River Tyburn try        Walking a Book, Walking a River      or   The Book Walk Continues