Let me take you back in time.

Back to Sunday, 21st January 1855 in a Trafalgar Square deep in snow, where about fifteen hundred people are gathering. They’re meeting to protest at the mismanagement and needless loss of life in the Crimean War, but can’t help larking about and they pelt passing traffic (and pedestrians) with snowballs. The police ask them to stop, but the protesters pelt the police too.

What begins in laughter escalates into a full scale riot and troops are called. Yet these protesters are representative of public opinion in regard to the war.  Enthusiastic support among a populace worked up into a war fury by the press at the war’s beginning had turned to amazement and shock as disaster after disaster was reported by war correspondents like William Howard Russell for The Times and the photographer Roger Fenton.  Not just military mismanagement – the Charge of the Light Brigade in the previous October came to symbolise that –

but the failure to provide troops with the most basic necessities of life and the dreadful death rate resulting.

Florence Nightingale, quite aside from the assistance her hospital gave, was a first rate data gatherer, a medical statistician who documented the privations and resulting medical conditions of the troops, far more of whom died from disease, malnutrition and neglect than on the battlefield. These logistical failures were partly because of difficulties with distance and terrain but also because government positions were filled by placemen unqualified for their role and supplied by contractors who had got their contracts because of their connections, not because they provided the best goods and services.  Money was made, stipends were paid but the servicemen were not supplied with what they needed.

Like many others the novelist Charles Dickens was angered by this. Dickens fans will recognise the name of this article as belonging to the government office in his Little Dorrit, where Arthur Clennam goes to discover the details of William Dorrit’s incarceration in the Marshalsea debtors’ prison. The Circumlocution Office was Dickens satirising the parlous state of what passed for the civil service in those days. Totally dominated by the Barnacle family  (a not so subtle metaphor on parasites clinging to the ship of state) it is ‘0ne of the principles of the Circumlocution Office never, on any account whatever, to give a straightforward answer.’ You can read Chapter 10, in which the Circumlocution Office features here. 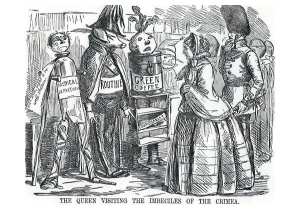 In fact, the sorry state of government civil services had been noticed earlier and a report commissioned by none other than Gladstone in 1853. The resulting report, by Northcote and Trevelyan, recommended the establishment of what is now the Civil Service and what the historian, Lord Hennessey calls “the single greatest government gift from the nineteenth century to the twentieth century; a politically disinterested and permanent civil service, appointed on merit and with core values of integrity, propriety and objectivity.”

That’s what Britain still has. There are some service failures today – nothing is perfect – but these are often driven by politicians not civil servants, however much politicians seek to blame them (sometimes aided and abetted by the press). We touched on this in last night’s panel discussion on COVID, Corruption and Crony Capitalism, but we ran out of time before we could discuss why cronyism is so damaging to public service provision and so destructive of human lives. This article is by way of a reminder;  January 1855 is where we were. Let’s not go back there.

The discussion was fun to do, especially for such a serious subject and, I am told, is generating lots of good feedback (and some book sales). Thanks to everyone at Claret Press for organising and to fellow panellists, Vicky Pryce and Dr Emily Barritt.  The recording is available on YouTube HERE.

Getting some of the promotional material for Oracle. Exciting!
Like the promotional images for Plague (@claretpress 2020) our public spaces are empty now. Is it an airport? Is it a shopping centre? Oracle to follow soon.
The glossy tight red buds of a horse chestnut, the scattered carpet of croci and the dangling tails of catkins: all signs that Spring is on its way.
The inspiration behind 'Plague' (@claretpress 2020 ) will be the subject of my talk on 9th March for The Thorney Island Society. Tickets from £7 at https://tinyurl.com/ycjtl7tv
This morning's blue sky had given way to lowering clouds over the Common. Sure enough the rain came.
Windy but not so cold on the Common this morning. Ii enjoyed seeing the mixture of rooks dogs and toddlers, not sure who was wary of whom.
Loading Comments...
Comment
×
%d bloggers like this: