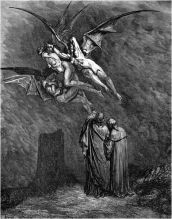 Given the antiquity of the Temple of Apollo at Delphi and the cultural influence it has had over the millennia it’s not surprising that large numbers of visual artists have been inspired by it.  Followers of my twitter feed will know I have been collecting and sharing images of Delphi, the Temple of Apollo and the various historical or mythical beings who came there, drawn or painted by famous artists.  So, we’ve had Gustave Dore’s Dante and Virgil encountering the Erinyes or Furies (left), Edward Lear’s water colour of the Phaedriades, the massive cliffs which loom over the Temple site and William Blake’s illustration for ‘On the Morning of Christ’s Nativity’ showing ‘The Overthrow of Apollo and the Pagan Gods’.

I’ve come across plenty of works, from ancient times onwards,  which portray 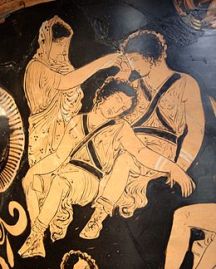 events or characters from Greek drama set at Delphi. On Greek redware (right) for example, showing the sleeping Erinyes being roused from their Apollo-induced slumber by the vengeful spirit of Clytemnestra, urging them to hunt down her son, and murderer, Orestes ( from Eumenides by Aeschylus ). Later paintings include Orestes being pursued by the same furies by, among others, John Singer Sergeant, William-Adolphe Bouguereau, John Flaxman and Franz Stuck, until we’re up to date with John Wilson (after  Bouguereau).

own versions, like that in Puck magazine (1877) or in Punch (left). In this instance it is the Rt. Hon. John Bright MP who is in the Orestes role, being pursued by the vested interests which he opposed through the Anti-Corn Law League. It was Bright, famous for his oratorical skills among other things, who coined the phrase ‘Mother of Parliaments’. He is also credited with first using the phrase ‘flogging a dead horse’ to illustrate the pointlessness of certain activities (in Bright’s case this meant getting the House of Commons to consider Parliamentary reform – ’twas ever thus).

As figures of terror and myth the Erinyes feature strongly across the ages. 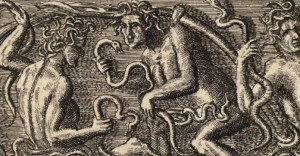 Wenceslas Holler etched them in the seventeenth century (right) and they have re-emerged in modern day gaming ( though with a rather different, sexy, look which speaks to who it is who plays those games rather than any mythological authenticity ). Naked the furies may have, traditionally, been, but not looking like a set of pouting, come-hither dominatrices.

The Pythia, or priestess of Apollo who spoke, as the Oracle, with Apollo’s voice is also a favourite subject in paint and in sculpture.  Eugene Delacroix showed Lycurgus consulting her, John Collier made her a hooded, pre-raphaelite religious perched high on her tripod or three-legged stool (left).  Note the gases swirling upwards from the crack in the floor of her underground room, the inhalation of which led to her madness and prophecies.  No such crevice has been found at the Temple site, but, as a character explains in the book “geologists have found that two geological fault lines cross beneath Delphi, with fissures under the Temple itself which allow small amounts of naturally occurring gas to rise to the surface. Rock testing showed ethane, methane and ethylene − formerly used as an anaesthetic − to be present. These would create a calm, trancelike state and, if a lot was consumed, a form of wild mania.”

I will be posting more of the images I have found – of the Erinyes, of characters from the Orestia and of Delphi and the Temple of Apollo in the coming weeks on my twitter feed and Facebook page.  Look out for some of those mentioned above, as well as works by Klimt, Claude Lorraine and others in the run up to the publication of ‘Oracle’ on 5th May.

Publication DayMay 5, 2021
'Oracle' the much awaited sequel to 'Plague' is available in shops and online.

Just because the sun is shining....
First draft done! 🤸‍♀️🤸‍♀️💃🙆‍♀️
The mowing creates pretend shadows beneath the trees. Plus some mini cricketers.
That's what I call a greensward. Lots of folk on the Common this morning and some purple stars colonising our gate and attracting bumble bees.
Went to the other side of the pond this morning, only to see newly hatched ducklings appear from the reeds and irises. They were then joined by a second family with rather older young.
Some old friends in full glory this morning.
Loading Comments...
Comment
×
%d bloggers like this: