…is the name of a free exhibition currently to be seen at Tate Modern. I went along to see it by chance, mainly because a friend let me know that she’d be up in town at relatively short notice, but I was very glad that I did.  I learned a lot, saw some fabulous art and appreciated again what a disaster colonialism was for just about everybody but Europeans ( particularly, but not exclusively, us Brits ). 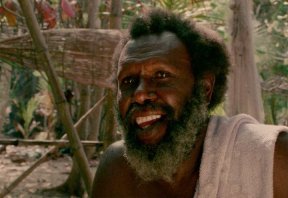 1992 is an important year in Australian law and history because the High Court of Australia delivered a landmark ruling known as the ‘Mabo decision’. This overturned the legal concept of ‘terra nullius’ – land belonging to nobody – which was used to justify taking over the land, occupied for thousands of years by Aboriginal and Torres Strait Islanders, that subsequently became known as Australia. Eddie Koiki Mabo was a Torres Strait Islander, a Meriam man, who, along with other Islanders, filed a claim in the High Court for native title to portions of Mer Island. After ten years, on 3rd June 1992, the High Court found for Eddie, who had died of cancer five months earlier.  3rd June is celebrated as ‘Mabo Day’ in the Torres Strait Islands and there is an ongoing campaign to make it a national Australian holiday. This exhibition looks at artworks inspired by the relationship between land and the Aboriginal and Torres Strait Island people, sometimes created in response to land disputes and colonialism.

I was unaware of the sheer number of different groupings of Aboriginal people and Islanders in Australia, something

one sees at the very start of the exhibition on the Aitsis Map. I had understood a little about the connection between the Aboriginal people and the land, a reciprocal and custodial relationship. They do not ‘own’ it in the European sense of dividing and apportioning pieces of land, but have an ongoing cultural connection with it, which underpins their history, spiritual beliefs, language, lore, family and identity.  This is inherent in the art of contemporary artists like Emily Kame Kngwarreye, Dale Harding and John Mawurndjul ( I loved his woven female ancestor ).

I was also unaware that there was an Aboriginal flag!  It is red, black and gold and can be found in Gordon Bennett’s Possession Island ( Abstraction ) 1991, a reflection, from a different perspective, of the British history paintings depicting the raising of the Union Jack on the ‘virgin’ land. It is also, briefly, in the tall man, 2010 of Vernon Ah Kee, a video installation of great power which depicts in ‘documentary’ style the events on Palm Island, of Queensland, in November 2004, following the death in police custody of Mulrunji Doomadgee a local man. The police station, police barracks and local court house were burnt down.

I was particularly impressed with Judy Watson’s series a   preponderance of aboriginal blood, 2005, above. This is a series of  reproductions of official documents and letters from the  Queensland State Archive, including electoral enrolment  statutes which excluded people with ‘a preponderance of  aboriginal blood’ from voting. It’s astonishing that these forms of institutional racism and discrimination continued until the 1960s. There were also some fine photographs from Tracy Moffatt in her Up in the Sky series from 1997 capturing the heat, dirt and poverty of an outback town, with references to the scandal of the ‘Stolen Generations’ which saw aborigine children removed from their parents and placed with white families. Although not displayed in any narrative order, these pictures clearly tell a story about that town and the people in it.

This exhibition is FREE and runs until Spring 2022. It is well worth seeing, though booking is, currently, required.