Chelsea, or the Royal Horticultural Society Chelsea Flower Show, happens in May. It has happened in May for as long as I can remember ( and I’ve been going, on and off, for thirty years or more ), but in 2021, thanks to COVID-19, it took place in September. I went along. 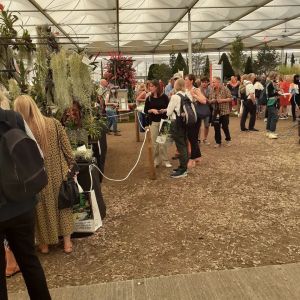 First impression – there were far fewer people at the show. This was a huge plus for those of us who were there! Only people who’ve attended this show realise just how crushed and sometimes unpleasantly crowded it can be. There was still excitement, but much less stress. Numbers had been restricted and, even so, all the tickets had not been sold.  That didn’t surprise me – at almost £100 per day ticket and taking place at the ‘wrong’ time of year. This is too expensive, oh RHS. It’s supposed to be a show for gardeners, not just for the wealthy who can afford it. Plenty of folk will simply have decided to watch the BBC’s blanket coverage on the TV instead and they won’t be returning.  Aren’t you trying to appeal to more people not fewer? This is how to make your (currently very popular) product into a ghetto (albeit a well-heeled one).

Second impression – this was a somewhat underpowered show. There were fewer contributors of all 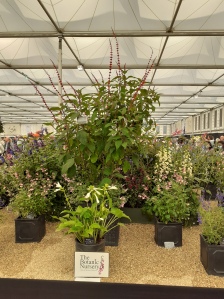 kinds, fewer show gardens, no ‘artisan’ gardens, fewer Grand Pavilion stands. The RHS had tried to fill the gaps, but, overall, rather unsuccessfully, I thought. I’ve never seen the Grand Pavilion so empty and, while it was undoubtedly the case that there was a real attempt to spread things out because of COVID, there were also some of the usual stands missing. I understand that some of regular exhibitors weren’t there because of, they said, the difficulty in preparing blooms for September, but how can it be more difficult than preparing blooms in the early and cold part of the year for display in May? So I missed stands like Bloms Bulbs, David Austen and other well-known growers.

What about replacements? It’s Autumn – season of mists and mellow fruitfulness – there was even a 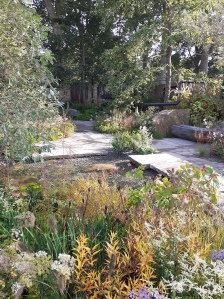 Harvest Moon on Tuesday night. Where were the stands celebrating that? Pumpkins and squashes appeared as a theme, but what about some of the other seasonal produce? My fig tree is producing. My roses are still blooming, in what has been a fabulous year for roses, at least in the south east of England, where were these? Didn’t the brains at the RHS come up with alternatives?  Or did they do so, only to find that growers and supporters weren’t going to play ball? Missed opportunity.

There was, nonetheless, much that was interesting and new. A stand from Penzance specialising in Restios which look like grasses, but are as a species, many millions of years older. They were stunning. There were new garden categories too, which needed less preparation time and construction, the Balcony Gardens and

the Container Gardens, the latter more successful, in my opinion.

Of course a good time was had, meeting up at Chelsea is an annual ritual and especially welcome after recent restrictions. Pimms was drunk, new people were met, the sun shone and the band played. Not quite back to business as usual though and it was interesting that we were contemplating other garden festivals where we could do all this and be rather better serviced (lunch has become impossible, even getting seats in a cafe/tent for a group of more than six is difficult). We all moved north to Chatsworth when that began, maybe next year it’ll be Hampton Court, or Malvern, or Rosemoor? I love Chelsea, but our relationship needs a serious looking at. Who knows what will happen next year.