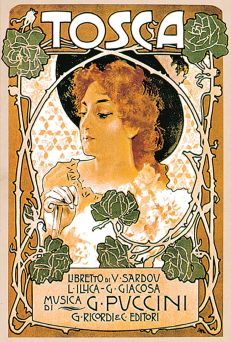 In April of this year I posted a piece about images of Tosca ( see ‘The opera…‘) ranging from the first performances of Sardou’s play, through to modern productions of Puccini’s opera. Six months later, I have amassed quite a collection of images, posters mostly, for the opera, films of both opera and play and some ‘souvenir postcards’ of both too. I’ll be using them during the launch of ‘Opera’ in a couple of weeks time. The story has inspired some unusual art works from varied artists.

The artist most associated with Tosca, partly because he designed many posters for the Comedie Francais, where Bernhardt performed, and partly because his style is such a good example of Art Nouveau is probably Alphonse Mucha. Even the Hohenstein poster for the opera’s premiere in Rome in 1900 owed much to Mucha’s style. But his is not the only style which was copied and often other artist’s works were rifled for use on the posters. See the use of the Gustav Klimt’s ‘Judith’ in the poster for Middlebury Opera’s production (right) .

I found a very striking poster from Poland, probably for a production by the opera company of the city of Bydgoszcz which was very reminiscent of the style of Frieda Kahlo (see left). It drew many comments on social media and divided people, they either loved or hated it.

Another Pole, surrealist artist and illustrator Rafal Olbinski, created a poster for the Cincinnatti Opera production (see below). He produced a series of posters of operas in the U.S. where he lives, often influenced by the works of Magritte. An American acquaintance pointed out that the Cincinnatti baseball team is called the Cincinnatti Reds and red is the dominant 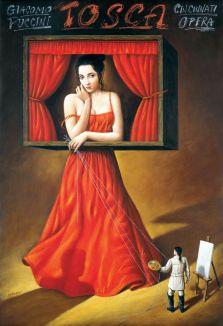 colour in the poster. I’m not sure if this was a sneaky subliminal message, but it is certainly surreal and I do not pretend to understand it, though it seems to be trying for an analysis of the opera at a subconscious level – Tosca pulling Cavaradossi’s strings.

Red, and black, are the colours most often used and Tosca herself is the character who appears most often. The film posters tend towards a rather more lurid style, but then they had to compete with other film posters of the time, which aimed to shock and entice an audience into the cinema. Predictably, they tend to focus on the scene in which Baron Scarpia persuades Tosca to agree to his physical demands in return for her lover’s

life, so there are plenty of leering Scarpias and retreating, suffering Toscas, though often clutching a dagger. The Italian ones are even more lurid than the Hollywood ones ( I suspect because Hollywood treated it as ‘high art’ ), but here is a more restrained offering – ‘The tragic love of Floria Tosca and Mario Cavaradossi commemorated in the immortal melodies of G. Puccini’. The director, ‘Carlo Koch’ is actually the noted German art historian and film director, Karl Koch, who undertook the film in 1939, jointly with Jean Renoir, at Mussolini’s invitation. Koch was Renoir’s assistant on Le Regle de Jeu

and Renoir was instrumental in getting Koch out of Germany in 1936. Renoir eventually withdrew from the film, but Koch completed it, together with his assistant, one Luchino Visconti. Incidentally Koch and his wife  settled in Barnet, north London once the war ended.

More modern posters reference the dagger, blood, sex, Castel Sant’Angelo and the twin candles at the head of Scarpia’s body as well as the main three characters. One of the more recent posters turns us back, full circle, to the style of Alphonse Mucha. This is by Echo Chernik, a noted commerical artist and illustrator who regularly adopts Mucha’s style. She created this poster (right) for Connecticut Opera’s 66th Anniversary performance of the opera.

'Opera' sitting in front of the cloak created for the King of Egypt in Verdi's Aida. Opera, wonderful opera. And I love the fierce cats 🐱🐱
This is, I am reliably informed, an LNER train on its way to London. #OperaJourneys
Now, I know that the Harrogate Crime Fest has finished, but here's an 'Opera' which has found its way there belatedly.
'Opera' across the pond, west coast (California) and east (Conneticut). Thanks to Steve Powell and Robert Gaurasci.
After the joyous launch of 'Opera' last Friday, two copies set out (with their owners) by train to Wales, to walk the Pembroke Coastal Path. They have got as far as Angle, where they sit next to two pints of Gower Gold. One has even acquired an Ivor the Engine bookmark. 😊@claretpress @visitwales @visitpembrokeshire #crimefiction #crimewritersassociation #crimereadersofinstagram #crimereadersassociation
Following on from the joyous launch of 'Opera' last Friday, I'll be speaking about the book and all things Cassandra Fortune with @callumelliottarcher of @exeter.library and @devonlibraries on Tuesday 27th at 7pm. It's free, so why not join us on FB Live. @claretpress @crimefictionuk #crimewritersassociation #crimewritersofinstagram #crimereadersofinstagram #crimereadersassociation
Loading Comments...
%d bloggers like this: